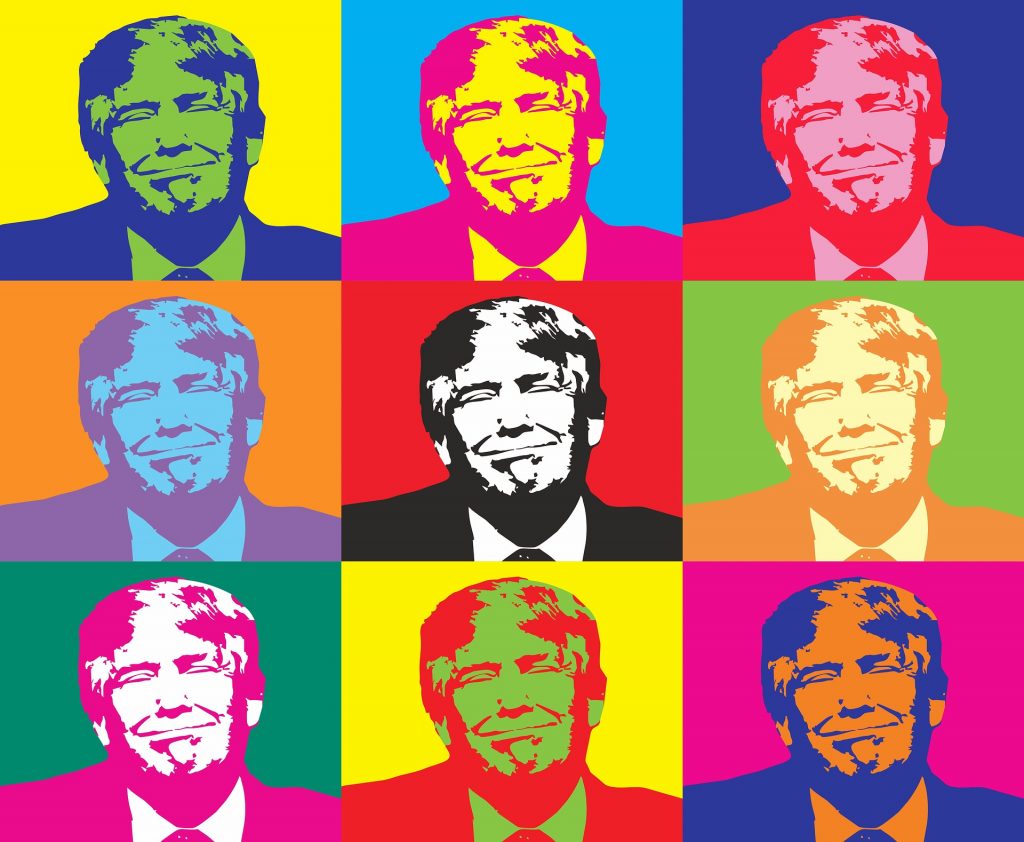 I often get asked, “So, is it an anti-Trump book?” and I answer. Not really. It’s about love in the time of Trump. My family would tell me, “Oh, she is anti-Trump.” Well, to that, I answer, not really. In fact, because of the Trump Effect, I have been staying tuned to politics and the news. It’s all so fascinating.

So,  what is the book about? Well, as the title implies, it’s about dating in the time of Trump. Alexa, this immigrant heroine, works for an internet-based media company called Viral Feed, sort of like Huffington Post and Buzzfeed. After the elections, her life is turned upside down not just because she voted for Hillary and Hillary lost, but also because she finds herself having to date and choose between 2 guys. This had never happened before, but after Trump won, suddenly, she has suitors. She also finds herself having to choose between Cayden, a mysterious hottie or Lee, a regular Joe. Before Trump won, the choice would have been easy but after Trump won, people have chosen political sides, those that are anti-Trump and those that are pro-Trump and boy does it go crazy after that.

Before Trump won, and before America became divided over their political affiliation, the choice was easy– date whoever you like! But after Trump, one has to consider, if they have the same values politically.

Love in the Time of Trump is actually based in part on my personal life. I was in a relationship with a Trump supporter and trying to figure out the mindset was difficult for me. I’m an immigrant and I am neither Democrat nor Republican. I’m an outsider in all of this but my beliefs being an immigrant is that I believe in an America that provides opportunities for all people, no matter which country they came from. But in the US, especially during the rise of Trump, immigrants, especially those that come from poorer countries, are viewed with reluctance and sometimes suspicion.

Having lived and traveled all around the US, in search for the answer to, “What happened to America?” I sort of have some answers. The Americans are tired with the status quo. The other countries have taken advantage of America in terms of trade. America is policing the world but is not getting anything for it. The jobs in America have moved overseas. There’s literally towns in America that are like ghost towns ( and I’ve seen a few ) and infrastructure that is in a state of utter disrepair. I come from a Third World Country and having visited a lot of places in America ( I travel to earn my living ) and have often wondered if I was in Third World Country. Some towns in America are just not doing well. And to add insult to injury, in a few decades, the Whites will no longer be the predominant race in America. I completely understand, after two and a half centuries the Americans of European descent will no longer be the majority. I understand that change will create discomfort and even fear.

The thing is, people are pinning their hopes on a man and a very flawed man at that thinking that he will save America. I understand the talking points, heck if I were an American, I would probably love the talking points. It’s about America First. Having traveled in America and seeing American flags in people’s homes, I understand how patriotic Americans are. The thing is, there are two Americas right now. There’s an America that believes that America is better off putting America first. And the other America that believes in allies and partnerships. The second group believes that America is better when it is aligned to the interests of other countries. Cliche as it sounds but using a campaign slogan, America is “Better Together.”

I’m not a political expert but I believe that there is always a win-win situation. Why can’t America have both? Putting America’s interests first but at the same time, making sure that there’s also room for alliances that works for both. I believe that jobs should stay in America because jobs are the lifeblood of any economy but at the same time, making sure that there are also win-win alliances that are formed. I don’t believe in freebies but I believe in incentives. I also believe that a great country is a country that knows where to allocate their budget to– to what the people need the most.

America just needs better leaders, better politicians, better laws that ensure that the ordinary American’s needs are met first and foremost. But that’s just the thing, it doesn’t take one man. No one man can solve all of America’s ills. It takes people, it takes several people and leadership not coming from one man but leadership from towns, counties, cities, states. Placing all of one’s hope on one man, having that savior complex, that only one man can save us all, is disempowering for everyone. The ordinary person has the power to choose better leaders and to demand better leadership. The president is just a figurehead and he or she is no savior.

I’m ranting again. I should really go back to why I wrote Love in the TIme of Trump. I wrote it because I have witnessed such change in America. I lived in America during the last years of Obama’s leadership and compared to now, Americans are just not getting along anymore. As Lincoln said, “A house divided against itself cannot stand.” And although Lincoln was talking about the government it could also pertain to the country of America.

I’ve traveled a lot over my 6 years in America. I’ve been lived in the East Coast then moved to the West Coast then the Southwest then moving yet again. Even if I don’t say anything, the topic always veers towards politics and Trump. The reactions are amusing, surprising and sometimes, downright scary.

I went to dinner with my group of mostly retired women. One of the women in that group invited her friend, a nice older gentleman and former doctor in his eighties Unbeknownst to our group, he was a Trump supporter. There were two immigrants in that table, one a European immigrant who moved to the US and became a citizen after she married an American and then there was me. Perhaps someone in the group was discussing healthcare or a related issue but suddenly, the nice older gentleman suddenly professed his love for Trump and basically told the European woman, who is a US citizen mind you, to basically go back home since she was criticizing the healthcare system in America. She wasn’t really criticizing more like comparing the healthcare system in the US and her former country. The older man would not have any of it and we were shocked by his rudeness. In not so many words he said,”Why don’t you go back to where you came from?” It was the worst case of Trumpism I had seen first-hand.

I  used to be friendly with a black guy in one of the buildings that I used to work in. Around 2017 up to 2018 before I left, he was very concerned about the state of America. He said he could not understand what had happened to America. He was very concerned that there were Trump supporters in the building and sometimes he would even whisper, “Would you believe it? The receptionist is a Trump supporter.” Or “Our boss is also a Trump supporter.” This happened in NY mind you, which made it equally baffling. Not only that, he already saw a link between Trumpism and whiteness. “You know what, they’re White that is why.” He would often tell me how crazy the world has become. Political correctness has flown out of the window.

Trump is like a trigger word for some. When I mentioned the name Trump, some people would react negatively and say, “He makes me ill.” or “I hate that man!” Some even mention his lies. To those that love him they will say,”He’s misunderstood.” And some even say,” He’s the greatest president!”

I’m a firm believer that Trumpism is just an effect of people’s disillusionment with the establishment. Trump may just have highlighted the real issue that had been simmering for many years. Many Americans feel that their elected leaders have not really done anything that would help them in their day-to-day life. Perhaps aftera  few years, once this fever subsides, people will look back and realize that the real issue was that the Americans wanted a US government that worked for all and not just for a few.

I like to keep a level head. I do not hate Trump. I neither like him nor dislike Trump. I’m more of observing the effects he has on people. I look at patterns, I look at reactions. I hope I’ve made my case here. Please do check out my romantic comedy Book 1 and Book 2: Love In The Time of The Trump Era